Announcing the Learning on Graphs Conference

Graph Machine Learning has become large enough of a field to deserve its own standalone event: the Learning on Graphs Conference (LoG). The inaugural event will take place in December 2022 and will be fully virtual and free to attend. We believe this event will stimulate research in the field by bringing together experts and practitioners from various subfields and adjacent disciplines.

As the field of machine learning has grown very rapidly, so too have its many subfields. In the last decade, machine learning on graphs has taken off, especially with impressive advances in approaches to graph deep learning in recent years. This has been a major boon to the application areas that process graph structured data, such as computational chemistry, transportation networks, social networks, recommender systems, or healthcare. Graphs can also be seen as a generalisation of other domains (e.g., grids or sets), and using graph-based ML architectures where established models such as CNNs and RNNs have traditionally been used is often advantageous.

However, growth also brings along a number of challenges. By now, there are many papers about learning on graphs that span a broad spectrum of objectives and methodological approaches; no one researcher can keep up with all of these aspects of the field. As such, more focused reviewer allocation and high-quality reviews are needed more than ever.

While there have been several successful workshops dedicated to learning on graphs (at NeurIPS, ICML, ICLR, KDD, WWW, WSDM, AAAI, and other venues), such workshops have grown very large. For instance, the last time a major graph representation learning workshop was held in person (NeurIPS 2019), there were more than 1300 registered participants, which made it the second most popular workshop at the venue and likely larger than many conferences in machine learning. As such growth is not compatible with the resources available to workshops, recent top-tier workshops oriented toward graph machine learning generally do not encompass all subfields of learning on graphs. Examples of such focused events include workshops on algorithmic reasoning, molecule discovery, learning on knowledge graphs, graph ML in industry, and graph learning benchmarks. Ideally, research in all subfields of learning on graphs would have appropriate venues for presenting and discussing research while still sustaining collaborations and connections, which are important because key ideas are often reemerging between specialty subfields.

We believe that a new conference dedicated to learning on graphs could play an important role in the research community and allow the study of machine learning on graphs to progress beyond what it is now. This year, with the help of an international team of some of the world’s top graph learning researchers, we are organising the inaugural Conference for Learning on Graphs (the LoG Conference). In our first year, the LoG conference will be held virtually and will be free for all to attend. The LoG Conference will have both a proceedings track published in PMLR as well as a non-archival extended abstract track. We will use OpenReview for the review process for transparency, and the review process will be double-blind. We aim for higher quality reviews through our more focused conference and additionally incentivise high-quality reviews with monetary rewards for top reviewers. The conference will take place virtually in December 2022; more information can be found on our website. We welcome any feedback and suggestions for the conference through this form.

After considering the other venues for work on machine learning or learning on graphs, we believe that the LoG conference will play an important role in this ecosystem of research. General machine learning conferences like NeurIPS, ICML, and ICLR have grown exceedingly large, so they are focused on wide-ranging topics beyond graphs. Other conferences like AAAI, KDD, WWW, WSDM, and SIGIR have also recently had many works about learning on graphs, but they also cover various different topics orthogonal to learning on graphs. Lately, new focused venues like ML4Health, AutoML, and the Conference on Lifelong Learning Agents (CoLLAs), as well as the new general journal TMLR have been founded. We share some of their reasons for founding, though graph learning research cannot find a perfect fit in any of these new venues either.

In the last several years, there have also been a number of workshops centred on graph ML. Many of these workshops have become very large — GRL+ at ICML 2020 had 73 accepted papers. It has become difficult for any singular workshop to meet the needs of the large community that works on learning on graphs; AAAI 2022 even had two separate graph learning workshops that each had a rather general scope.

As such, various workshops that focus on specific subfields of graph learning have been founded in the last few years. These cover topics like graph learning benchmarks, graph learning in industry, algorithmic reasoning, learning with molecules, and more. We would like to unify these communities in one single venue to allow for increased interaction and collaboration between them. The intermingling and cross-pollination of these separate communities has already significantly advanced learning on graphs: benchmark creators make datasets from various application areas, popular graph neural networks originally evaluated on citation graphs have come to be applied to countless other domains, and models from various fields like natural language processing and the physical sciences have been unified under general graph neural network frameworks. The LoG Conference will help form links between these diverse communities of researchers.

The conference will cover diverse subfields of learning on graphs, broadly defined. A non-exhaustive list of subject areas can be found in the Call for Papers. We welcome graph learning papers from application areas like molecule discovery, physical sciences, recommender systems, computer vision, natural language processing, and more. Also, we welcome papers on graph neural network architectures, expressive graph neural networks, equivariant networks, graph kernels, scalable graph methods, graph generative models, and so on. We expect to cover a wide-ranging mix of theory and application, as well as works of industrial and academic nature.

Researchers around the world spend hours working on reviewing papers for academic conferences, but there are only indirect incentives for submitting high-quality reviews. We aim to incentivise better reviews through reviewer awards that come with monetary gifts. Currently, we expect to give $1500 USD awards to each of the 20 top reviewers. The top reviewers are decided through a combination of reviewer feedback and meta-reviewer feedback. We will make more details available later. 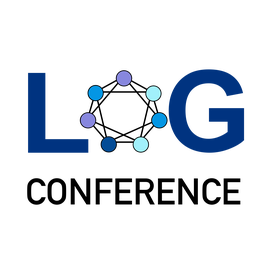